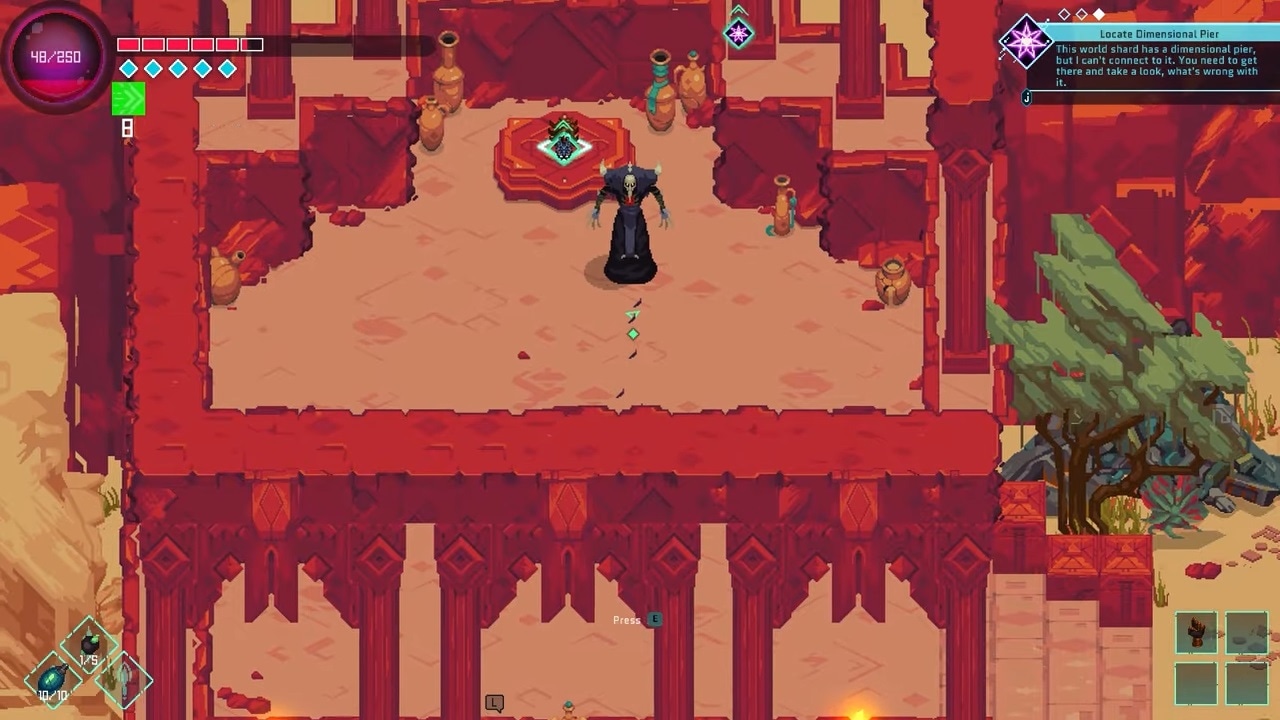 By Brandon O. Bryant Last updated Sep 4, 2021
0
Share
If you’re looking for your next in-depth action RPG, you’ll definitely want to keep an eye out for UnDungeon, which is set to launch on Xbox Game Pass later this year. The more we learn about this wonderful pixel game and its sci-fi story, the more we want to know. So we contacted developer Laughing Machines for more information.

Undungeon is a colorful pixel action RPG under development by Laughing Machines, in which you are tasked with bringing order to all dimensions. No pressure!

We don’t have a specific release date for Undungeon yet, but it is slated to launch later this year.

Will Undungeon be on Xbox Game Pass?

Yeah! During the Xbox Indie Showcase earlier this year, Undungeon was confirmed to join Xbox Game Pass on day one.

What is it about?

In Undungeon, it’s not just one dimension that’s at play – several multidimensional Earths have collided. “The Undungeon multiverse is different from ours,” the developers tell us. “His worlds exist thanks to a certain divine technology which has existed since the dawn of time. A conflict between the Gods led to the violation of the fragile order, resulting in the destruction of most of the worlds in a cataclysm called the Change. Before this cataclysm, multiple dimensions existed: each with its own sovereign, its manifestation and its God. Unable to leave their dimensions, the gods communicated through heralds – devoted and immortal messengers. We play as one of those heralds and join “Herald’s Undercover Bay, or just HUB”, continues Laughing Machines, which is “a refuge made of stable matter. It is maintained by the energy generated by one of the constantly meditating heralds. This refuge is the last hope of the immortal entities inhabiting the multiverse. They use HUB to coordinate their efforts to create a new, more stable reality. “

Designing a game that spans multiple timelines and dimensions seems pretty mind-boggling, and Laughing Machines explains that “the main challenge had been to design a multiverse consistent with its own laws of physics. When we finally did that, the rest of the challenges didn’t seem so difficult. From a technical perspective, ”Laughing Machines continues,“ implementing multiple timelines that influence each other is a big challenge for game designers. It’s extremely difficult to verify how something like this would work in a game, so our designers had to visualize that, to create something like a “mental projection” of these timelines… Naturally, we came up with a good number of interesting plots. decisions where characters can exist in multiple dimensions simultaneously, and time flows differently in each of them. So we need to reflect that in the events and dialogues of the game. ”

Exploration and combat are essential in Undungeon. “As far as combat is concerned, we’re trying to create something unique here,” the developers begin. “Our fight will be very deep. One of our main mechanisms is the organ system where you can build your character by implanting different organs in their body. It’s up to you whether you want to use ranged build, be a damage reflective tank, or recruit companions to do the job for you. It seems like combat will keep us on our toes – for example, if we don’t heal carefully, our enemies can seemingly steal our healing item. You can design your build around your playstyle with these Organs, Nodes, and Runes, and Laughing Machines says one thing the team is looking forward to is seeing how players interact with the leveling system in the game. game. ”It’s quite complex and unusual compared to the upgrade systems in other RPGs. It’s interesting to see what builds people will create, what they will like and dislike about this mechanics in general.

Hades and Curse of the Dead Gods are listed among the inspirations of Undungeon. Undungeon describes himself as bringing “the spirit of old-fashioned action RPGs” and Fallout 2 is cited as another inspiration. “The most important thing is the atmosphere. One of the games that inspired us the most is Fallout 2. When you play Undungeon, you’ll see what we’re from … We’ve spent a lot of time working on the story: few modern RPGs can do it. allow, but in games of yore it was common practice.

Laughing Machines adds that another aspect the developers are eagerly awaiting is the possibility of Undungeon fan theories. “The multiverse that we have created is, as we mentioned earlier, large and complex. However, the amount of information we give to the player is quite scarce. We look forward to when fan theories start to circulate! There is a lot of space for creative thinking here. To sum up, the game consists of a lot of unorthodox decisions that we have become used to. But how will these decisions be perceived by the players? Our team is delighted to know. “

How is the world?

“In Undungeon, the structure of a world is a bit like that of a dungeon: we have two worlds, each of them divided into ring zones that the player can explore step by step. In each of these areas, the player is assigned a certain objective. Once completed, the player makes this area an integral part of a particular world, ”explains Laughing Machines. “Peaceful and warlike colonies appear, spawning merchants, bandits and other NPCs. Each region has its own past, each tribe – its own customs and attitude towards technology, whether it is a community of amphibians turned intelligent or a group of invaders from another dimension. It seems that we will have a little freedom to interact and exchange with these other travelers, and will be able to recruit them to our side, or even destroy their camps. Amid all this interdimensional chaos, HUB exists as a safe, neutral space in which the Herald can recuperate.

The world of Undungeon features a cute hand drawn pixel art style. “Our project has been in development for quite a long time. Over the years, it has undergone a number of reboots, ”the developers explain. “In the most recent reboot, we had hired an experienced pixel artist who helped us establish a final distinctive look of the game. Conceptually, we try to keep the balance between several trends. A unique surreal style emerged in the process. Originally, the world of Undungeon followed the so-called “logic of a dream.” Eventually, the narrative grew into strict science fiction, but the ambiguity of all of the game’s phenomena remains. “

Any news of Undungeon’s accomplishments?

We don’t have the full list of Undungeon’s accomplishments yet, but Laughing Machines has given us a hint. “Achievements are meant to reward the most persistent players,” begin the developers. “Multiple games, searching for secrets – it will all pay off. Some [achievements] that we designed, including the ones attributed for unlocking different endings, have been cut due to time restrictions, but we want to go back to some of them and see if we can still complete them.