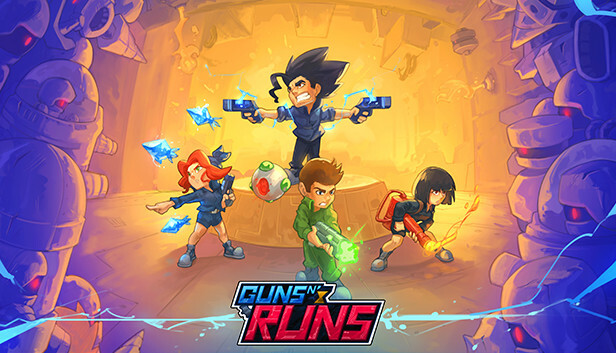 PixelHeart has announced a new collaboration with Statera Studio which has resulted in Guns n’ Runs, a new action platformer that will be heading to Switch in Q4 2022. There will be both a physical and digital release for this game .

Guns N’ Runs is a stylish platformer, action shooter, packed with special superpowers and dash mechanics. Unlock hundreds of meticulous challenges and boss battles. All with an immersive soundtrack and an individual story for each of the 8 characters.

Fans of physical editions will be delighted to know that the game will be released in 3 different versions on Switch: a limited and numbered PAL version, a limited and numbered US version and an unlimited PAL version. The limited edition, complete with a unique cover and a few extra goodies, will be available only through PixelHeart’s website (2,000 units for Switch). A standard physical version is available in North America through VGNYSoft.

In Guns N’ Runs, you take control of eight seasoned members of the Conspiracy team in a stylish, hand-drawn pixel-art race against a technopathic prodigy and his robot army. Help our protagonists infiltrate a bunker in the middle of the Atacama Desert in a difficult and dangerous capture and rescue mission. Designed for a single player, this game features over 200 challenges, 23 bosses, and focuses on each team member’s individual story.

The ECI will host a virtual Asian Regional Forum meeting on “Making our elections inclusive, accessible and participatory”

Steamforged Games turns Elden Ring into a board game

Norco will be released on consoles on October 20.